From the TT to the XC 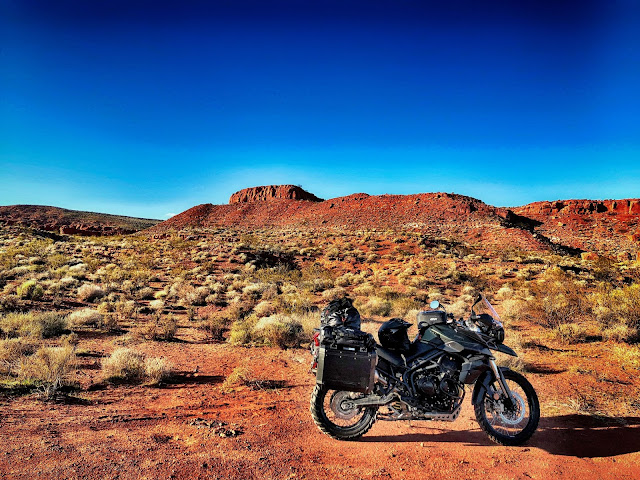 My first experience with a Triumph motorcycle was on a Bonneville. Not too terribly exciting given the bike's ubiquity and longevity, arguably the bike that kept Triumph in business, much like Harley's Sportster. What made the experience extraordinary were 1) my spouse was pillion, 2) we were on Isle of Man and 3) riding the circuit of the TT the week before the race. 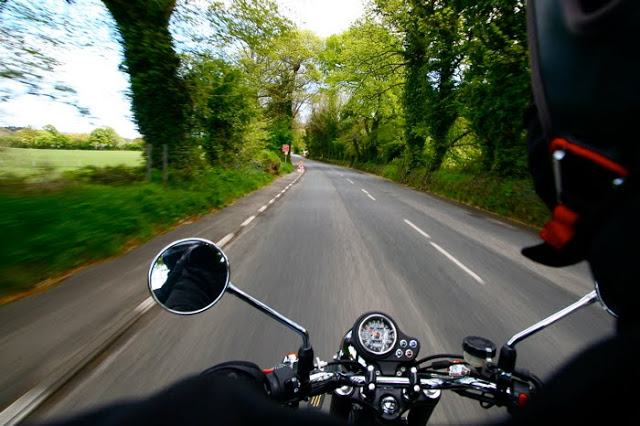 Since selling my previous ride, the KLR 650, I've been in one of those bikeless funks, especially since converting to ADV riding. I hit the sites, the ratings, the rankings, the owner forums, thinking all the while I'd go Bavarian, but in my digging around I found that things weren't all they're cracked up to be in the Black Forests; that according to riders and reviewers alike, there was something better. A Brit.

A Triumph Tiger 800XC now occupies my garage and is my weekly commuter, 1000 kilometers a week, longitudinally across the State of Utah.

This one a trade-in for an upgrade to Triumph's flagship dual sport, I was promised it was the best on the lot, that it's owner was impeccable in his riding and maintenance, all fodder proven false in one afternoon with a 5mm hex wrench and a downloaded vehicle record. 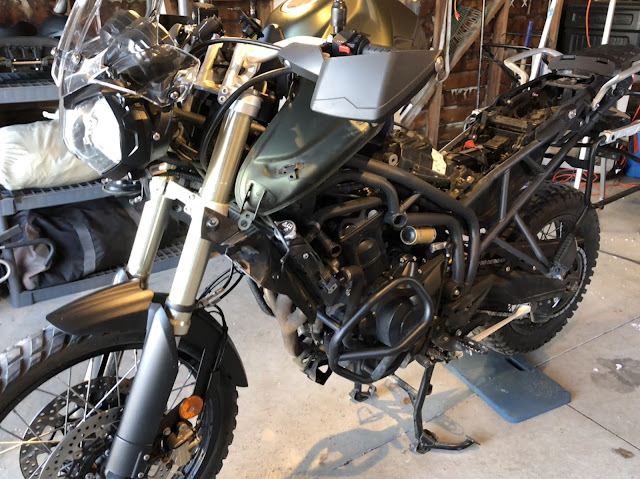 This 800XC has been down hard, high and low sides, evidenced by a new LH engine cover, terribly touched-up crash bars, a bent and severed at three mounts sump plate, a new RH mirror and windscreen, deep scratches on the RH side of the headlight cluster, dents on both sides of the tank, none of which I noticed during my test ride. It's like crack, I'm sure, getting back on a bike after so long, even if it's for a sorting-out, pre-purchase ride. I should sell motorcycles.

With 11890 miles, decent Metzler rubber and a solid throttle response, torque and flickable handling, I was sold.

So, along with the ugly and bad came some good, like a pair of Givi 37L Trekker Outback Panniers and mounts. For the uninitiated, these are state-of-the-art hard case panniers. 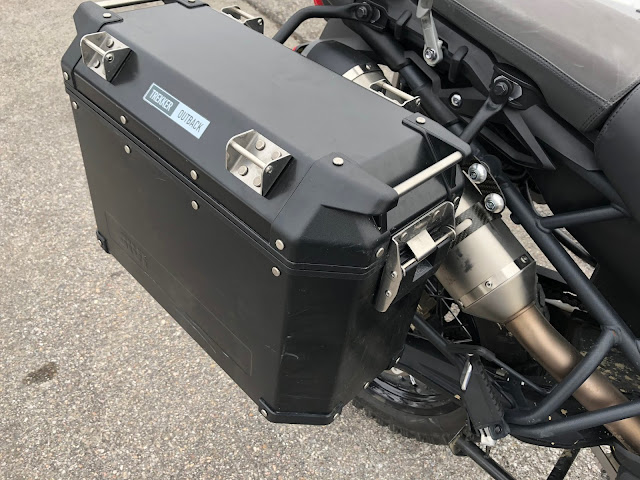 One last farkle is the LeoVince exhaust. It produces a nice motor note without overwhelming. Not sure on performance improvement since I don't have a baseline with the bike before. 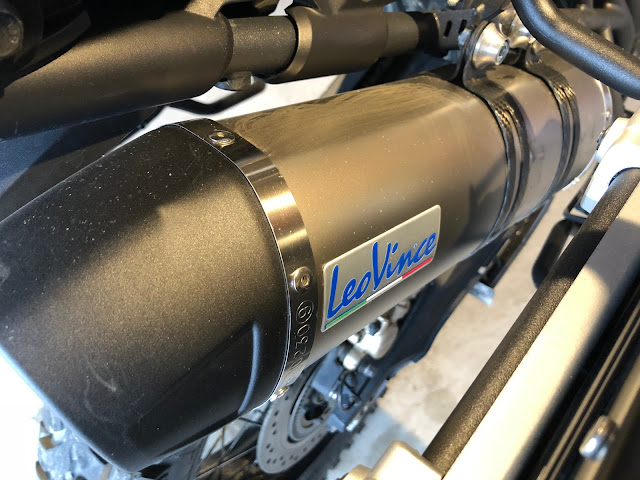 Despite its checkered past - show me a well-ridden bike without one - I'm satisfied with its performance and can't wait to rack up the miles in the very State that's home of the marque's namesake, the Bonneville.

Popular posts from this blog 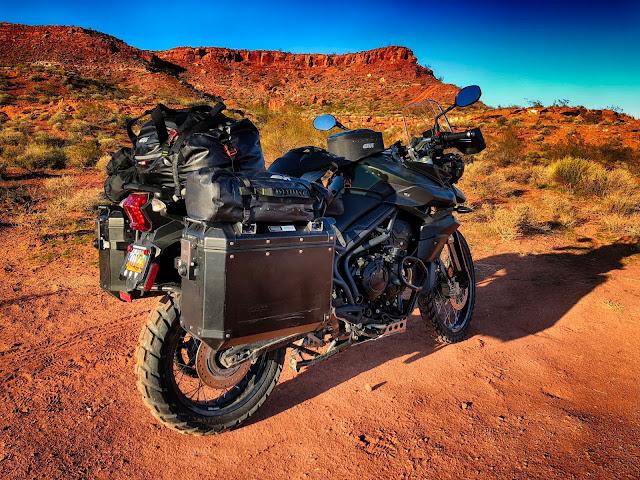 The Givi 37 liter Trekker Outback panniers fill up pretty quickly with camp gear on one side and riding gear on the other, so I went with some Givi soft bags to round out my packing needs.

The Givi 6 liter tank bag is an electronically seam-sealed case with a horseshoe zipper hidden under a waterproof flap.


It connects to the tank with three straps, one that goes around the frame at the base of the triple clamp and two others that connect to frame points left and right under the seat. All straps are adjustable and have quick release fasteners. I've zip-tied the top fastener to deter errant thievery, leaving the other two connectors free to unbuckle for fill ups.

While the zipper on the bag has a sturdy and big pull, the zipper is a hassle making quick access to bag contents something better left to the panniers. Maybe this will get better over time, but I have my doubts. I wouldn't buy this again, opting for something with easier access. 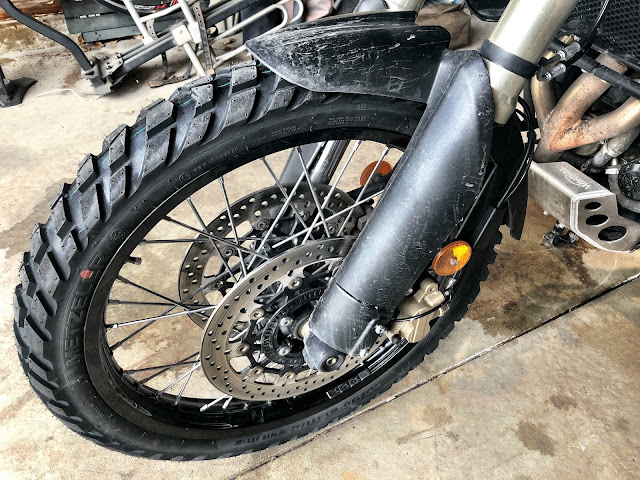 Read through UTADV and you'll see the three consecutive failures of the rear tube in a new Shinko SR244. Come to find out, the tire itself, though the right size, would slip on the rim and bind the tube which would then fail along the creases. That's when I vowed to not skimp on rubber. The Tiger left D&K Motorcycles in Bountiful yesterday shod in new Metzler Karoo 3s, lauded as a solid 70/30 tire that's very capable in sand. Fits my bill. I'll update as the miles piles on. The guys at D&K in Bountiful are great, by the way, and their service is impeccable. 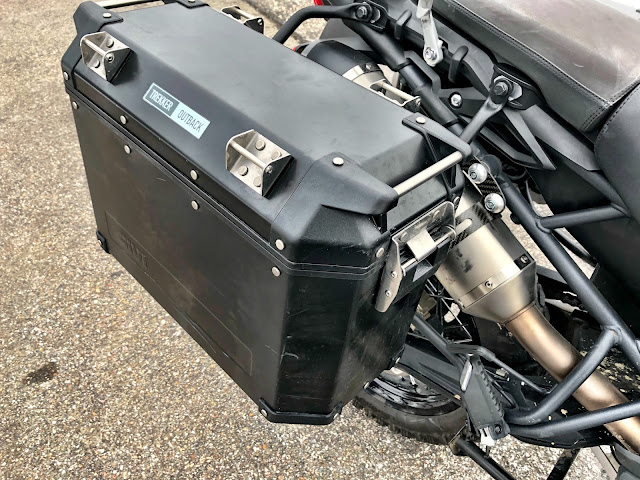 Calling anything on a motorcycle weatherproof is a misnomer, unless we're talking about these panniers. O-ring sealed, riveted aluminum and reinforced polymer construction make these live up to the claim, not to mention bullet-proof, or I should say high and low side proof.

Givi engineered clever locking systems that works tandem in securing the box and securing the box to the bike.
And those clever Italians created a fail-safe way to know that the panniers are firmly attached to the rack with their green-means-go indicators.
Thirty seven liters is enough to hold all my usual gear for ADV camping and I appreciate the anchor points in the recessed lids for more storage.